1 Deltares, This email address is being protected from spambots. You need JavaScript enabled to view it.;
2 Rijkswaterstaat

Salinity Intrusion through the Rotterdam Waterway puts a significant pressure on fresh water availability for drinking water and industry, and is expected to increase due to climate change (changing river discharge characteristics, sea level rise) and infrastructural developments (waterway deepening). In an open connection to sea, salt can intrude beyond the tidal excursion length due to the density driven estuarine exchange flow (gravitational circulation, Hansen and Rattray, 1965; Geyer and MacCready, 2014), but also due to tide driven dispersion, e.g. through tidal trapping in harbor basins and branches (Fischer, 1979), which are omnipresent in the Rhine Meuse Delta. In this study, we investigate the contribution of the various dispersion mechanisms in the Rhine Meuse Delta, to support design of effective salt intrusion mitigation measures.

The central method in this study is salt flux decomposition (see Lerczak et al., 2006). 3D-model results for salinity and flow at multiple locations along the Waterway and New Meuse have been decomposed into time-averaged and time-dependent and depth-averaged and depth-dependent components. From these components, the individual contribution of estuarine circulation related, time-dependent shear related, tidal oscillation related, and net flow (mostly run-off) related salt fluxes have been determined.

From analysis of the salt flux contributions it was found that in the Rotterdam Waterway, the estuarine circulation related salt flux dominates over the tide related contribution most of the time, whereas tidal dispersion related fluxes dominate further upriver in the New Meuse. However, during surge events the contribution of the estuarine circulation reduces strongly, also in the Rotterdam Waterway. At these times, salt transport into the Rhine Meuse Delta is mainly produced by a temporal reversal of the net, tide-averaged flow, related to the large storage area in the system, and stratification vanishes almost completely. These results imply that measures aiming to reduce salt intrusion by enhancing vertical mixing in the Rotterdam Waterway can be expected to be effective most of the time. However, they likely have no effect on salt intrusion during surge events, which might be the more critical conditions. 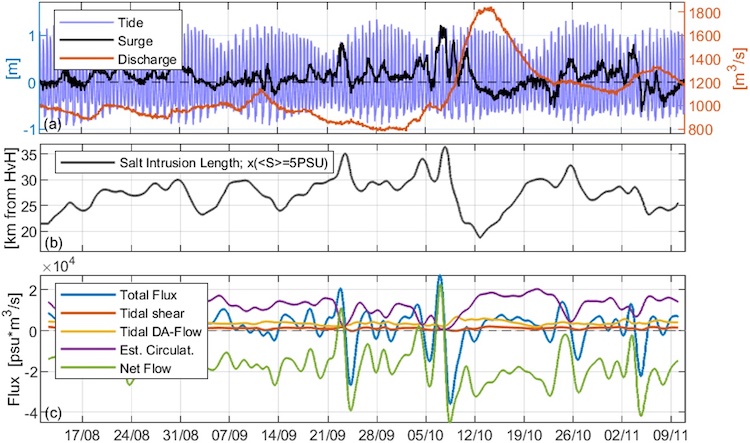 Figure 3: a) Forcing of the system; b) Salt intrusion into the system; c) Total tide-averaged salt flux (blue, positive is inward) and contributions of the individual salt flux components, for location Maassluis (Rotterdam Waterway).