Coastal foredunes are important for coastal safety (de Winter, Gongriep and Ruessink, 2015) and constitute habitats with a high biodiversity (Everard, Jones and Watts, 2010; Miller, 2015). Foredunes form due to a complex interplay between wind, morphology, vegetation and aeolian sediment transport (Hesp, 1988; Davidson-Arnott et al., 2018). They form through plants establishing on the bare beach able to trap sediment transported by the wind. The sediment eventually builds up and the dune morphology is altered starting from low embryo dunes which eventually become high prominent foredunes. Wind, Sediment transport and plants are thus important determinants for the foredune development and shape. There is great interest in improving the predictive capacity of foredune development (Davidson-Arnott et al., 2018) for both environmental significance and coastal safety, particularly in light of a projected increase in erosion events in future.

To study the controls of foredune growth on high, densely vegetated foredunes, field data was collected during a period of five weeks in Egmond aan Zee, the Netherlands. Foredunes were approximately 20 m high with steep slope (1:2) and dense cover of European marram grass (Ammophila arenaria). Wind velocity, direction and turbulent kinetic energy (tke) were measured across the foredune, while sand transport was recorded on five selected days. Moreover, vegetation surveys were done across three transects, which were complemented with sedimentation data from LIDAR elevation maps.

Depending on the incident wind direction, the wind flow changes in both magnitude and direction. Generally when flowing across the foredune, the wind first decelerates and is deflected towards the alongshore direction, followed by acceleration up to 310% and turning to perpendicular onshore. Highly oblique flows were deflected up to 38° towards cross-shore direction at the crest. The tke was directly proportional to the wind velocity exhibiting its biggest magnitude at the crest, but relatively it was largest at the dune foot and on the slope. Aeolian transport decreased substantially across the foredune. Sediment fluxes at the upper dune foot increased first to 328% and subsequently decreased towards the dune crest. Sediment transport fluxes varied for different days in response to wind velocity and direction determining the maximum available fetch. The vegetation assays showed that the foredune was covered densely with European marram grass (20-100%), reaching its maximum at the crest. A comparison between vegetation cover and sedimentation throughout the field campaign revealed a strong influence of vegetation of foredune morphology. Highest sedimentation rates were related to vegetation cover between 5-50%. The study showed that the foredune has large influences, both on wind characteristics as well as on transport. 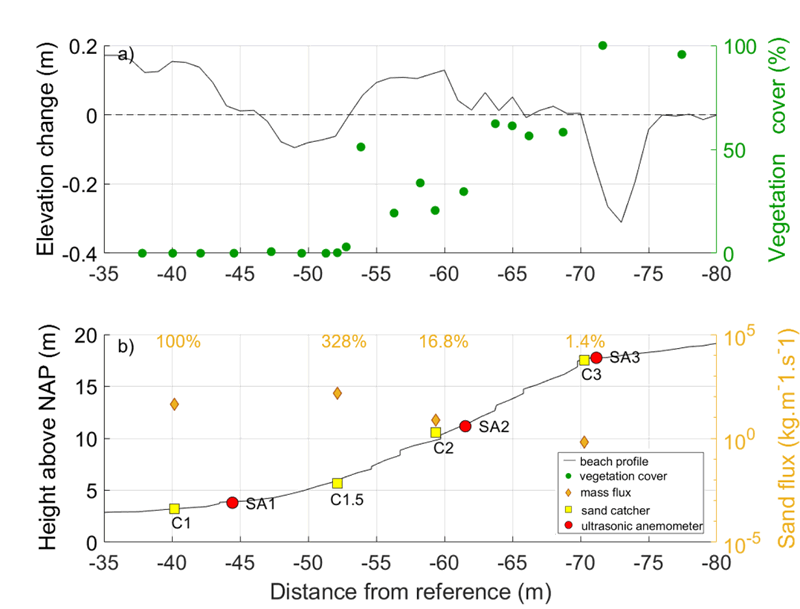