Where does the sand go? A morphological study of the Belgian coast

1 KU Leuven, This email address is being protected from spambots. You need JavaScript enabled to view it.

The Belgian coast is a 65km long, macro-tidal, sandy coast. This coast fringes a low-lying coastal plain, which is protected against flooding by dunes and dikes. Since the 1970’s beach nourishments are implemented for the purpose of coastal safety, as well as maintenance of the recreational beach. Nowadays sand nourishments are the preferred way of coastal protection. However, several locations along the coast struggle with structural erosion and require very frequent re-nourishment.

Changes in volumes are presented both as observed and corrected for artificial works such as dredging and nourishments. To correct for these artificial works, the cumulative added volume is subtracted from the observed volumes in the respective areas. The remaining signal is then an estimate of the autonomous morphological behaviour of the coast.

As opposed to what is usually thought, the Belgian coast is not erosive everywhere. Instead, large differences in morphological behaviour are found along the coast (Figure 1). It is expected that the Flemish banks and associated tidal channels contribute to this differential behaviour.

Large accretional areas are found on both sides of the Zeebrugge breakwaters and west of Nieuwpoort, where a sand bank connects to the coast. Erosional hotspots are the areas of Knokke-Zoute and Wenduine. Tidal channels close to the shore are thought to be the cause of this structural erosion. In these erosional areas, nourishments are used to keep up the beach volumes.

In general, the area above the low water line is observed to be accretive. Yet, after corrections for nourishments, only holds about half of the coast shows accretion. The rest is compensation by beach nourishments. The sub-tidal area is merely erosive, and accretion is only found near Zeebrugge and west of Nieuwpoort.

Closer inspection of the accuracy of the investigated data must point out at what rate the coastal volumes are evolving and which trends are significant. 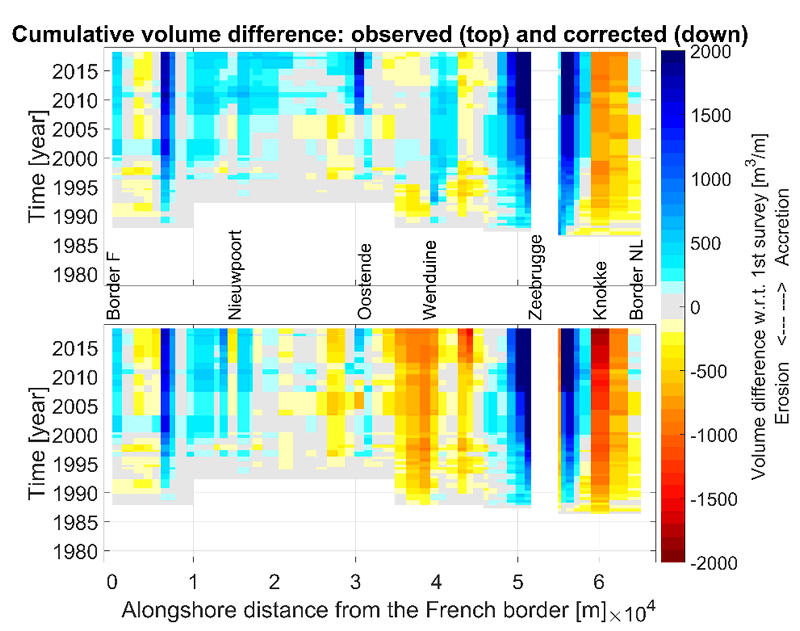