Chenier dynamics at an eroding mangrove-mud coastline in Demak, Indonesia

The erosion of mangrove-mud coasts is a serious problem worldwide, affecting millions of people in their daily life. For example, income drops of 60-80% and halving of commercial sea fishing over a period of 5-10 years have been reported in eroding areas of Java, Indonesia, largely attributed to the loss of mangrove spawning and sheltering grounds (Manumono, 2008).

This research focuses on the role of cheniers in the dynamics of mangrove-mud coasts. A chenier is defined as a beach ridge, resting on silty or clayey deposits, which becomes isolated from the shore by a band of tidal mudflats (Augustinus, 1989). A GIS study by van Bijsterveldt (2015) shows that the presence of cheniers has a positive effect mangrove vegetation. Cheniers create shelter, in which mangrove vegetation can recover. However, cheniers can be extremely dynamic and little is known about the dynamics of cheniers in this area: what is the origin of the sand, how are cheniers formed, how will cheniers evolve? 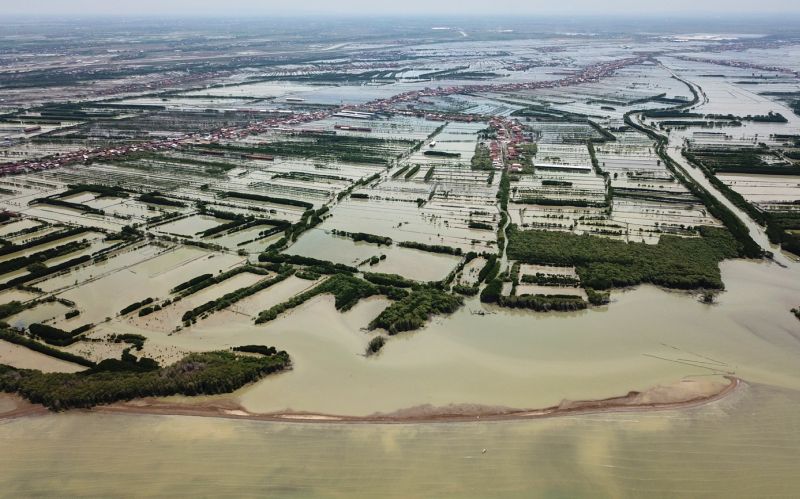 During a field campaign between October and December 2018 in Demak, Indonesia, one chenier was intensively monitored (hydro- and morphodynamics). This data will be used to set up and validate a numerical model (Delft3D), which will be used to systematically test the hypotheses. First, a 2DV model will be set-up (one cross-section, perpendicular to the coastline) and validated with data from a field campaign carried out between October and December 2018 in Demak, Indonesia. This 2DV model will be subsequently simplified to test hypotheses (i) and (iii). In a next step, the model will be extended to a 3D model, such that hypothesis (ii), (iii) and (iv) can be tested through additional numerical experiments.

The numerical model will give a range of conditions under which each mechanism can occur. This could help explain the chenier dynamics any given coastline, and predict how cheniers will evolve under changing boundary conditions in the future.

Manumono, D. (2008). Behaviour change of coastal community as an impact of abration and rob in Demak Regency. In National Seminar of Dynamics of Agriculture and Rural Development.

van Bijsterveldt, C. (2015). Natural mangrove restoration: how can it be induced? Universiteit Utrecht.