106 m3) of its ebb-tidal deltas that are being considered. Therefore, to understand how such nourishment will behave, a good understanding of the sediment transport patterns and its spatial and temporal variability is needed. In a recent study (Lenstra et al., 2019) we showed that sediment transport patterns in Ameland Inlet not only depend on wave and tide conditions, but also strongly depend on the different phases of its cyclic evolution. However, we neglected the effect of wind and assumed the Ameland Inlet to be an isolated system where the tidal watersheds could not be flooded. The latter is realistic during calm weather conditions, but during storms the exchange of water over the tidal watersheds can be quite large. In this study we present results on the effect of wind and basin connectivity on estimated sediment transport patterns in Ameland Inlet based on the results from a high resolution model including the effects of winds, waves and flooding of tidal watersheds.

We set up a model in Delft3D/SWAN with two-way coupling (domain decomposition) between a high-resolution Ameland Inlet grid and a medium coarse grid Wadden Sea grid. Boundary conditions for the tides and waves were based on a North Sea continental shelf model and wave buoy data, respectively. We included effects of wind growth because waves in the Wadden Sea are to a large extent determined by local wind growth. Wind and pressure input came from WRF and HIRLAM data. Wind forcing was schematized by binning the wind events into 5 main directions and studying for each direction an extreme scenario and a quiet scenario in the year 2007, 2011 and 2012. 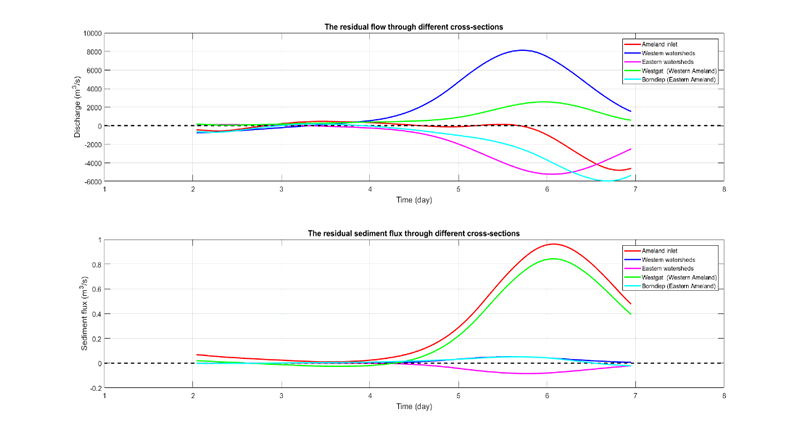 Figure 1 The time-series of residual flow and sediment transport through 5 cross-sections of Ameland Inlet.