Bed sediments in estuaries and tidal basins are often composed of both sand and mud. Sand-mud interaction can significantly influence the sediment dynamics and the long-term morphodynamic evolution of a system. However, their dynamics are still often investigated separately (or one fraction is even ignored), partly because of lack of knowledge on this interaction.

Analysis of field data shows that the mud content in intertidal areas of two different systems (Wadden Sea and Western Scheldt, the Netherlands) is bimodal: bed sediments tend to either have a very low or a relatively high mud content, with little variation in between (e.g. see Figure 1). Besides, the large-scale distribution of the mud content seems to be constant on a decadal time-scale, despite local morphological changes. This suggests that the mud content has two stable equilibrium states, and an unstable state in between (Herman et al., 2018). In this research we investigate physical mechanisms related to sand-mud interaction responsible for this bimodality by means of long-term numerical simulations with a schematised Delft3D model.

The first mechanism is based on the theory of van Ledden (2003), stating that there are two regimes within sand-mud mixtures (cohesive and non-cohesive). In the cohesive regime, mud influences the erodibility of the bed, such that muddy beds become muddier. Model results show that this mechanism indeed induces a bimodal distribution of the mud content. Besides, it leads to more abrupt transitions between the sandy and the muddy areas, which are also observed in the field. Moreover, the results show that sand-mud interaction also has an impact on the morphological evolution of the basin.

Another mechanism that can lead to bimodality relates the hydraulic roughness of the bed to the mud content in the top layer (following Soulsby & Clarke, 2005). Larger sand grains generate more near-bed turbulence than mud particles, such that the hydraulic roughness of mud beds is lower than that of sandy beds. Therefore, the bed shear stress is lower and sediment preferentially deposits on muddy beds.

This research brings us a step closer to an understanding of the mechanisms that determine sand-mud patterns. The coming years we will explore this further to unravel the stability of the two modes, the boundary conditions that determine their state and the thresholds that – when exceeded – would lead to regime shifts in the sediment bed composition. 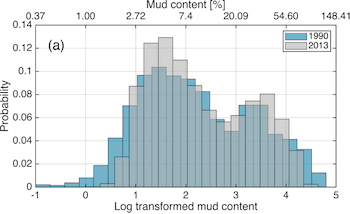 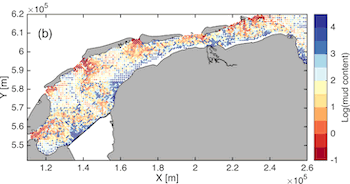