Regime shift in sediment concentrations in the Loire estuary

Although very little observations have been reported over the 20th century, literature clearly shows that sediment concentrations increased drastically over the years. The scarcity of data not only applied for the sediment concentrations over the years but also for bathymetry and hydrodynamics, resulting in uncertainty about the historical states of the estuary. To cope with the large range of uncertainty and variability in the reported observations and model parameters, an idealised model called iFlow has been used. The strength of the iFlow model for this research was twofold. Firstly, iFlow allowed to identify the essential physical processes driving the estuarine sediment dynamics. Secondly, iFlow is computationally efficient, allowing to perform extensive sensitivity studies. In this way, we could determine which processes play a role in the current state of the Loire estuary and how they are affected by deepening. Furthermore, by mapping the effects of the uncertainty on the different physical processes, robust conclusions could be drawn about the effects of deepening, despite the given uncertainty in the input and simplifications of the iFlow model.

The effects of deepening on the physical processes has been assessed by only varying the depth in the model. Deepening generally resulted in enhanced sediment import or decreased sediment export. Hence, the transport capacity in the Loire became much more favourable for the import of sediment. In order to determine the robustness of these findings, an extensive sensitivity study was performed of 14.157 simulations (1287 conditions for 11 bottom profiles over time) to capture the influence of uncertainties in multiple input parameters. For the bottom profile representing the bathymetry in the year 1900, none of the conditions resulted in a hyperturbid state, whereas independent of the conditions, the likelihood to find a hyperturbid state always increased for increasing depth. From this we can conclude, that the observed regime shift towards high sediment concentrations would not have happened without the deepening of the Loire estuary. 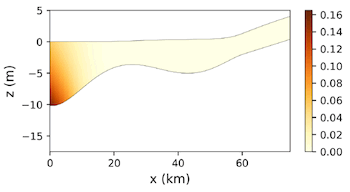 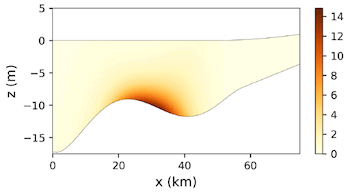