How do tidal divides affect the morphological evolution of tidal inlets?

1 University of Twente, Marine and Fluvial Systems. This email address is being protected from spambots. You need JavaScript enabled to view it..

Barrier coasts such as the Wadden Sea are important coastal systems that are characterized by a chain of tidal inlets and barrier islands. These systems are highly dynamic, and their long-term (i.e. centurial) morphological evolution is affected by complex interactions between various elements, such as the backbarrier basin and the tidal inlets.

Tidal divides have been identified as important features for the stability of double inlet systems (van de Kreeke et al. 2008), while also allowing residual transport to pass over them (Duran-Matute et al. 2014). Despite these findings, the role of topographic highs (such as tidal divides) on the equilibrium cross-section and spacing of multiple tidal inlets is not yet fully understood. To study that is the aim of this work.

To achieve our aim, we use an idealized barrier coast model that can simulate the long-term (i.e. centurial) evolution of multiple tidal inlets towards an equilibrium state (Roos et al. 2013). The morphological model for the evolution of the tidal inlets is based on the stability concept of Escoffier (1940) and is coupled with an idealized hydrodynamic model that is forced by a tidal wave on the outer sea and computes the co-oscillation in the tidal inlets and backbarrier basin. As a methodological novelty we extend the model to allow arbitrary bathymetries in the backbarrier basin. We performed ensemble simulation in which we systematically vary the number of bathymetric features by varying the number of valleys and topographic highs. 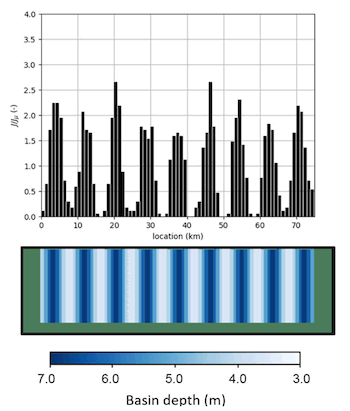 Our results show that the location of tidal inlets that remain open is strongly affected by variations in bathymetry, with most inlets remaining open in the deeper parts of the basin. Also shown by our results is that the equilibrium number of open inlets is hardly affected by the number of topographic highs in the basin. This implies that the number of open inlets is a system characteristic rather than the effect of local depressions in bathymetry. Furthermore, we identify a competition between bathymetric features and the distance between inlets; the outcome of which determines the equilibrium location of open inlets.