Understanding and predicting salt intrusion in estuaries and deltas is an important scientific challenge, as trends and fluctuations in salt intrusion will have implications for fresh water intake, agriculture, etc. To gain fundamental knowledge about salt dynamics idealised models are being used, such as that of MacCready (2007), MC07. However, problems arise when these models are applied to situations with a high freshwater Froude number. In this study, an extended version of the MC07 model is used to study the response of salt to time-dependent forcing (spring-neap cycle, fresh water discharge and storm surges).

The model computes the subtidal currents and salinity in an estuary. The momentum balance is solved in the same (analytical) manner as in MC07, but the salt balance is solved with a Galerkin approach in space and a Cranck-Nicholson scheme in time. The Thames estuary is used as a prototype estuary to compare model output to observations. Specifically, assessment will be made of adjustment time scales, as well as the response of salt intrusion to the spring-neap cycle, time-variable fresh water discharge and to storm surges.

Adjustment time scales, response characteristics and salinity patterns in an estuary will be presented for a larger part in parameter space than what can be captured by the MacCready (2007) model. Moreover, an analysis of the response times to various time-varying forcing agents will be presented. 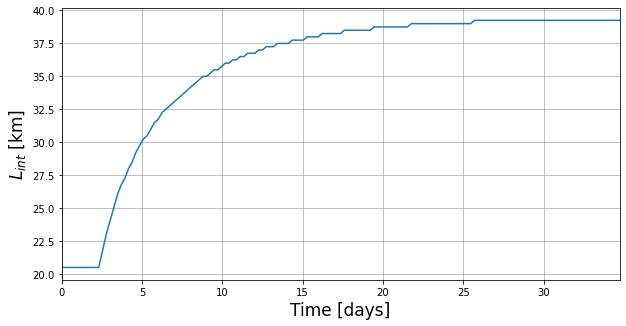 Figure: Example of the response of the salt intrusion length Lint to a sudden decrease in river discharge calculated by this model. For this setting, the MC07 model yields negative salinities in part of the domain.