Here, we studied the long-term (>years) morphological effect of nourishments on cyclic channel-shoal dynamics. Using an idealized geometry and simplified forcing in Delft3D/SWAN, we implemented and studied the morphodynamic evolution of ebb-tidal deltas for a wide range of possible nourishments, varying in size, location and phase of the cyclic behavior. We compared our results with a base case model simulation without nourishment which showed clear patterns of channel-shoal dynamics resembling those observed in the Wadden Sea.

Our results show that the nourishments accelerate the natural cyclic behavior, where different nourishment locations show different effects. Nourishing the updrift shoal reduces the period between successive shoal attachments by 30% (see figure 1), whereas this is only 15% if the nourishment is placed in one of the channels. Surprisingly, most of the nourished sand remained in the updrift side of ebb-tidal delta, even during the channel and shoal migration. This indicates that the nourished sediment causes morphological changes by adjusting the patterns of sediment transport rather than directly feeding the shoal that attaches to the downdrift island. As a result, the volume of the ebb-tidal delta is higher than in the base case model simulation, even after several shoal attachments. Furthermore, any nourishment initially results in additional sediment transport into the tidal basin. However, this effect is limited to the first cycle of the modeled channel-shoal dynamics. 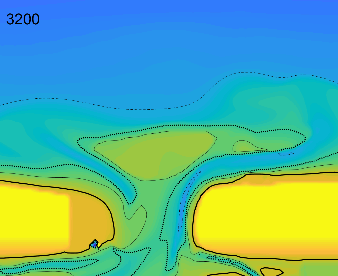 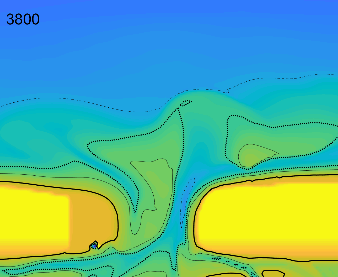 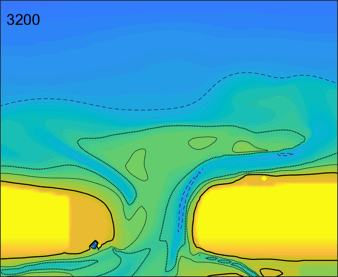 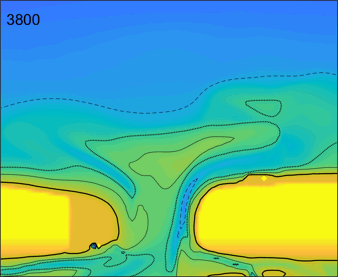 Figure 1. Depth obtained in model simulation with (left) and without (right) nourishment at the updrift shoal at the moment of nourishment placement (3200 modeled days) and 600 days hereafter. It can be seen that the nourished ebb-tidal delta is close to shoal attachment and new channel has formed, whereas the base case is still in the preceding phase of channel rotation and shoal growth.