As an important step toward a unified description of processes driving well-mixed, partially mixed, and salt wedge estuaries, we developed a fully nonlinear subtidal width-averaged model that is applicable to all these salinity structures. The model was run for a straight uniform rectangular channel for a large range of model parameter values representing the entire estuarine parameter space.

We identified four salinity regimes, resulting from different balances of dominant processes: (1) a dispersion dominated regime; (2) the Chatwin regime, dominated by gravitational circulation; (3) the Chatwin regime with salinity front, similar to regime 2 but with a distinctive salinity front dominated by momentum advection; and (4) a fully momentum advection-driven salt wedge regime. It is shown that each regime is uniquely determined by two dimensionless parameters: an estuarine Froude and Rayleigh number, representing fresh water discharge and tidal mixing, respectively. This results in a classification of the regimes in terms of these two parameters (Figure 1). 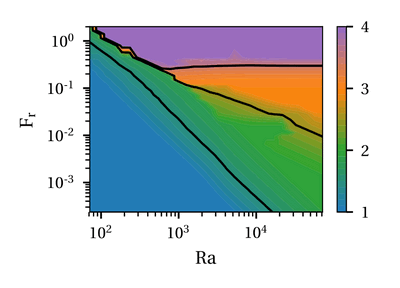 Figure 1 The four regimes (indicated by colours) dominated by transport due to (1) dispersion, (2) gravitational circulation, (3) momentum advection at a distinctive salinity front, (4) advection in a salt wedge. The regimes are plotted in the parameter space of the fresh water Froude number (Fr; indicating discharge) and the estuarine Rayleigh number (Ra; indicating mixing).