To contribute to solving scientific and practical questions, numerical morphodynamic models like Delft3D are often used to predict the hydrodynamics, sediment transport processes and morphological development of coastal systems. In such models, many of the processes are parameterized based on a variety of assumptions. One of the parameterized variables is the bedform-related hydraulic roughness k­s, which is often assumed to be related to the ripple height. This roughness affects the magnitude and vertical structure of the flow and, consequently, the magnitude of the sediment transport. Yet, their sensitivity to k­s is not well understood.

The aim of this study is to determine the effect of the hydraulic roughness caused by small-scale ripples (length ≈ 10 cm, height ≈ 1.5 cm) on hydrodynamics and sediment transport computed with a high-resolution, fully-coupled Delft3D model forced by waves, tides, wind, and atmospheric pressure. The Van Rijn (2007) sand transport formula is used. The study site is the wave-current dominated Ameland ebb-tidal delta. In 2017, a six-week field campaign was executed here, in which bedform heights and lengths as well as hydrodynamics were measured. The model was run for the duration of the field campaign with ten bedform roughness scenarios, in which the roughness was either coupled to the hydrodynamics, or was set to a constant and spatially uniform value. The default scenario comprised the Delft3D predicted spatio-temporally varying roughness scaled to best match the measured hydrodynamics. We compared the predicted ripple heights hydrodynamics and sediment transport magnitudes and directions of all other scenarios to the default scenario.

First results indicate that the predicted ripple heights in the default scenario are quite similar to the measured ripple heights, although the predicted heights are much more variable through time. The simulations show that ks affects the depth-averaged current velocity by several cms/sec (Fig. 1). This in turn affects the predicted sediment transport magnitude and direction. In more detail, the cumulative alongshore suspended load transport magnitude can increase with more than 50% when a constant roughness (0.015 m, based on the observations) is used instead of the default variable roughness. 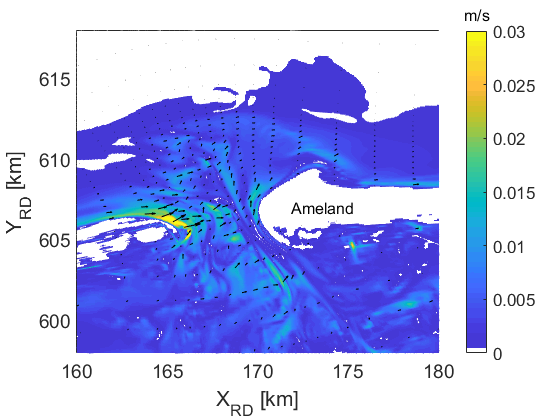