1 KU Leuven, This email address is being protected from spambots. You need JavaScript enabled to view it.

The Belgian coast is a 65 km long sandy shore, separating the North Sea from the low-lying hinterland.

Bathymetry of the Belgian part of the North Sea is characterised by the Flemish Banks; shallow areas separated by deep tidal channels. The nearshore sand banks are, veering obliquely from the shoreline for roughly 20 km and up to 5 km offshore.

Flemish coastal defences are formed by alternating stretches of natural dunes and man-made sea dikes, protecting the hinterland from flooding. These structures are required to meet the safety standards which were recently revised in the Masterplan Coastal Safety (Afdeling Kust, 2011). Currently, the Complex Project Coastal Vision aims for further improvements towards 2100. To assess coastal safety, annual topographical and bathymetrical surveys are performed. These measurements reach from the dunes or sea dike up to 1500 m offshore, covering the entire coast. With measurements starting already in the 1970's, the Belgian coast is amongst the best monitored in the world.

Existing raw survey data were processed to a set of common cross-shore oriented transects, an approach similar to Dutch JarKus data (Roest, 2017). Annual data were available for 1997-2019. Further, a toolbox is under development to pre- and post-process arbitrary coastal survey data. This allows for derivation long-term statistics and profile parameters on otherwise heterogeneous data. While such research was performed on coastal volumes for the Belgian coast, it was never performed on other parameters.

Previous research has shown that on decadal time-scales, the Belgian nearshore zone has gained sediment by both Natural feeding and artificial sand nourishment at a rate of 106 m3/y (Houthuys and Roest, 2019). Furthermore, Strypsteen et al (2019) concluded that the natural dunes grow linearly in time, at an average rate of 6 m3/m/y. This dune growth actually exceeds the rate of sea level rise, indicating coastal resilience. Contrastingly, shoreface and seabed are mostly erosive. Exceptions are only found in several well-known accretion zones, such as: Zeebrugge and the Broersbank. Nearshore erosion is mainly found in the tidal channels confined between the Flemish banks and the coastline. The Groote Reede channel between Oostende and Blankenberge is deepening at a rate of approximately 25 mm/year. Along this tidal channel, the transition from the sloping shoreface towards the flat seabed is migrating onshore, manifesting itself as erosion up to 100 mm/y. The combined effect of growing dunes and an erosive shoreface leads to steepening of the coastal profile. If this trend persists, it may affect the overall stability of the coast. 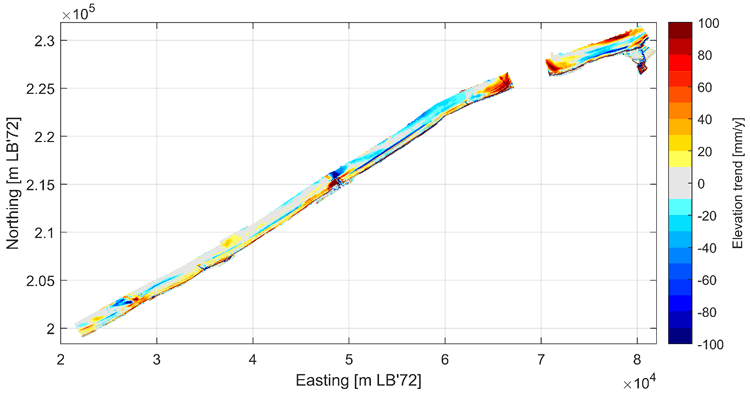