Long-term morphodynamics of a coupled shelf-nearshore system forced by waves and tides, a model approach

Sandy shelves often exhibit the presence of large-scale rhythmic bedforms, with longshore spacings of several kilometres, heights of tens of meters and which evolve on decadal and centennial time scales (Dyer & Huntley, 1999). Examples of such bedforms are the shoreface-connected and tidal sand ridges on the continental shelves of Long Island (New York, Duane et al., 1972) and the southern North Sea (Fig. 1). These bedforms are believed to strongly influence the nearshore wave patterns and thus its sediment transport and shoreline evolution (Schwab et al., 2013). Safak et al. (2017) found a persistent undulating shape of the shoreline in the vicinity of the Long Island shelf sand ridges, which they correlated to the presence of these ridges. However, despite the presence of offshore shelf sand ridges in many areas of the southern North Sea (Fig. 1), such a correlation does not seem to exist as the shoreline is rather straight in these areas. This suggests that other factors are of importance. A major difference between Long Island and the southern North Sea is that the former is subject to waves that predominantly are aligned with the shelf ridges, while the latter experiences waves that come from different directions. This difference in wave climate led to the hypothesis that shoreline undulations occur when shelf sand ridges are aligned with the direction of wave propagation. To test this hypothesis, the coupled morphodynamics of the shelf and the shoreline are studied for different wave conditions.

Simulations are carried out with a numerical shelf model (Delft3D-SWAN; Nnafie et al., 2020), which is coupled to a shoreline evolution model (Q2D-morfo; Arriaga et al., 2017). The Belgium coastal zone is selected as a study area (Fig. 1). The coupled model system is forced with tides and waves. Constant wave conditions (from the southwest or northwest), as well as more realistic wave conditions (time-varying wave heights, wave directions and wave periods) are considered. The simulations, which start from an initially longshore uniform and cross-shore sloping bottom, are run for 500 years.

Model results show that sand ridges develop on the shelf, which resemble observed shelf sand ridges. When these ridges are aligned with the direction of wave propagation, strong shoreline undulations occur, while these undulations are weak when the wave direction changes in times. These results provide support for the hypothesis that the direction of wave propagation is of great importance for the coupled shelf-shoreline morphodynamic evolution. 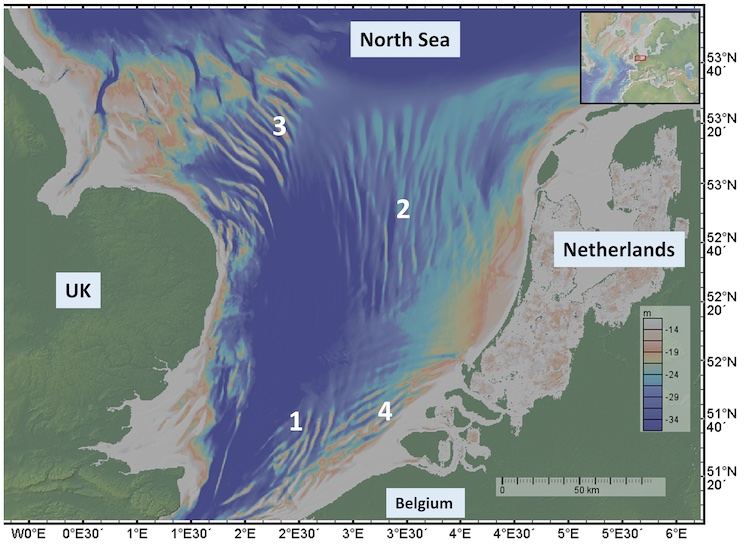 Figure 1.a) Bathymetric map of observed fields of tidal sand ridges (1, 2, 3) and shoreface-connected sand ridges in the North Sea (4).