The deformation of the former unique enchanting Citarum delta, Indonesia in the last four decades

The Citarum (Ci locally means water or river) is among the most discussed deltas in Indonesia, The river upstream passes Bandung city highland, and its present water is used to support the needs of Jakarta capital city, while some more portions are used for irrigation in the lower plain reaches. It was at least until some years after 1981 that the river had 8 distributaries, namely from SE to N are the Mati, Jaya, Gembong, Kuntul, and Belubuk which formed bird foot type delta, then to the N the Belubuk elongate delta, two mouths of Wetan cuspate delta in the NW, and finally the cuspate-arcuate Bungin delta in NE part. In 1965 the Jatuluhur dam (elevation 100 m) was installed, followed by Saguling (1985, 645 m) and Cirata (1987, 225 m) dams respectively and Curug weir (1988, 20 m) along the main river. The water is then dispered into the West, North, and East Tarum irrigation schemes. It is estimated that at present only about less than 20 % of its river discharge still flows to the former natural river mouths.

Ongkosongo (1984) has mentioned that an interdeltaic plain W of Bungin was indicated in subsiding state (Figure 1). This subsidence was also confirmed by many reports, such as those by Abidin et al. (2014) using, among others, InSAR remote sensing analysis. As a result of the aforementioned operated infrastructures and water flow dispersion, there seems to be a reduced sediment load and transport capacity. People also deliberately deforested and destroyed the former mangrove swamp into fishponds. As a result 4 distributaries i.e. the Jaya, Gembong, and two mouths of Wetan were abandoned, and the delta plains, except the Jaya, Kuntul and Belubuk were mostly severely eroded since the middle 1980's (Figure 2). The delta has become deformed and irregular, and it is estimated that this will more severely continue. In order to monitor further environmental degradation, it is suggested that the integrated coastal managers in charge should take proper actions at least with frequent serial remote sensing mapping as well as doing nearby sand replenishment, shore protection, and mangrove planting actions. 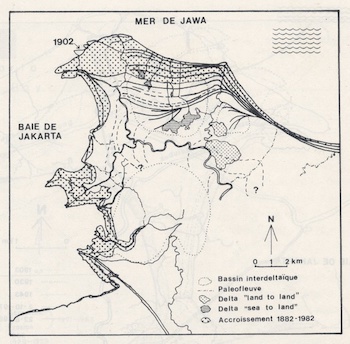 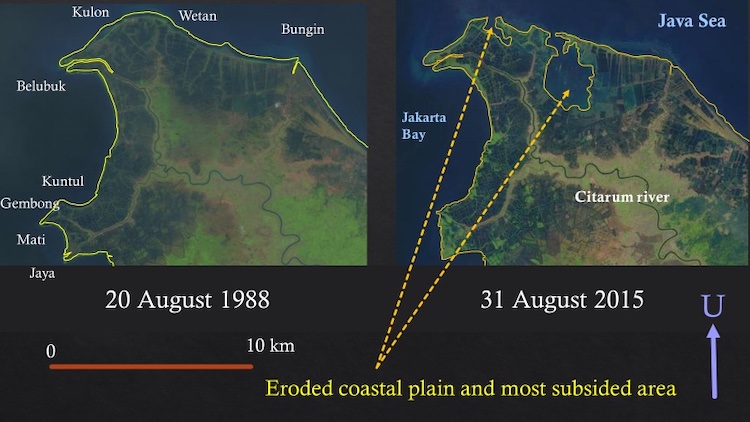