Besides quantifying coastal protection services of nearshore biogenic habitats, there is also a need to quantify the persistence of these habitats under changing conditions in order to successfully implement Nature Based Solutions. Therefore we studied the stability of seagrass meadows. Seagrass meadows and bare sediment represent alternative stable states, with sediment resuspension dynamics being a key driver of system stability via the Seagrass – Sediment – Light (SSL) feedback. We explore the SSL feedback stability by quantifying the sediment stabilization by seagrasses, and using these measurements to calculate under which conditions seagrasses end up in a turbid environment.

We quantified sediment resuspension velocity thresholds (ucr) in situ for a Zostera marina meadow growing in a sheltered bay in the Gullmars fjord in Sweden, using a field flume that induces near bed wave motion. ucr was determined for three shoot lengths: full length, shoots clipped to 0.08m, and removed shoots, on both medium and fine sand. Comparing shoot removal with control measurements on bare sediment indicated that rhizomes did not influence ucr of the top sediment layer. Overall, ucr followed a positive linear relation with blade area, which was independent of sediment type when normalizing ucr for the resuspension thresholds after shoot removal.

Comparing measured ucr against calculated natural wave conditions showed that the seagrass meadow at the study site is presently not prone to light limitation. Changing the hydrodynamic conditions revealed that the effects of increasing storm frequency and magnitude only had a minor influence on the SSL feedback. Increasing average winds and lowering of the mean sea level, e.g. due to land uplift, had a much stronger influence. This was caused by the majority of turbidity events in the study site occurring under calm conditions, but with favourable wind direction. Increasing storm magnitude and lowering of the mean sea level however resulted in increasing differences between the turbidity levels of bare and vegetated sediments, increasing the bi-stability of the system and thereby increasing the risk of meadow collapse if biomass is reduced by other pressures. 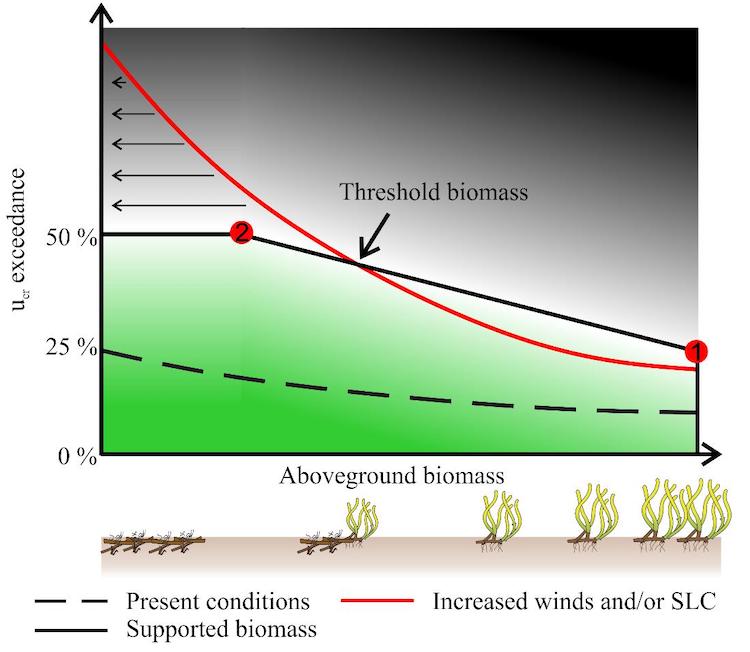