1Vrije Universiteit Amsterdam, This email address is being protected from spambots. You need JavaScript enabled to view it.

In the National Park Zuid Kennemerland, near the town of IJmuiden, five notches have been dug in the foredune ridge to reactivate and promote aeolian transport of CaCO3-rich beach sand towards the dune system. This project is executed to increase coastal safety and protect the rare (Natura2000 protected) coastal dune biodiversity. Since the start of this project (2013-present) sand transported in suspension has been trapped and collected every two weeks in sandtraps custom made by Arens Bureau for Beach and Dune Research. In this research we investigate spatial and temporal aeolian sediment dispersal patterns of one of those years (2017).

The sandtraps (n=15) are distributed in four coast-parallel north-south transects (A to D, 1 km in a N-S and 1.2 km in an E-W direction). The traps are about 80 cm in height and are places 1.5 meter above the surface with the opening pointed to the dominant south-west wind direction. Large holes in the backside of the trap, covered with a fine-grained mesh, allow wind to go through but sand particles >106 µm to drop in a collection bag at the bottom of the trap. Samples (n=213) are analysed by dynamic image analysis, which provides grain size and shape distribution data, and thermo gravimetric analysis which determines the carbonate content. The grain shape parameter used here is the aspect ratio, defined as the ratio of the minimal to the maximal Feret diameter of a grain.

The carbonate content of suspended load sediment has an average of 7.8 wt%, a maximum of 10.2 wt% and a minimum of 5.7 wt% varying on a spatial and temporal scale. Beach sediments (source) and dune sediments in the subsurface underneath the traps show a significantly lower carbonate content. These results clearly show the positive effects of the reactivation of the dune system considering that all the sandtraps are enriched in carbonate. 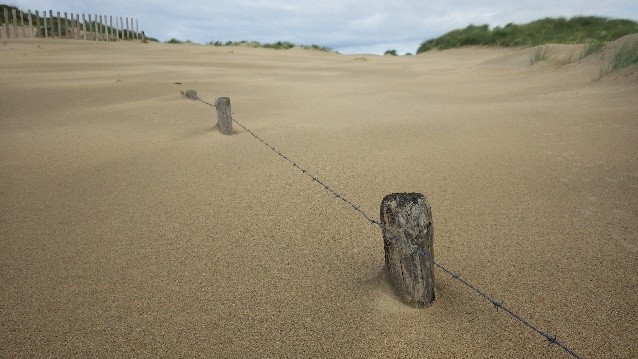 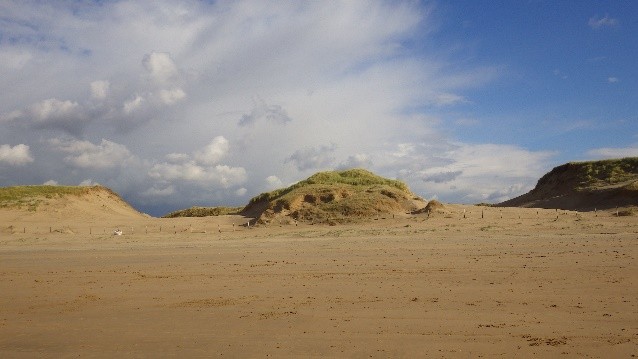