Washovers are naturally occurring, low-lying features on barrier islands. They occasionally experience overwash, which drives morphological change, while at other moments in time aeolian transport is dominant. The vertical accretion rates of washovers can be very high and allow barrier islands to grow with sea-level rise in a natural way. Along the Dutch coast most washovers have been closed off by sand drift dikes, thereby blocking the transport of sediment to the barrier island. Reactivation of washovers is being considered, but questions remain on how effective these measures are and how washovers will develop in time due to storms and aeolian transport. Models (like Xbeach) have been developed that can predict the morphological evolution of washovers during storms, but these need to be validated against field cases. Rottumeroog is one of the most natural barrier islands in the Netherlands and is no longer maintained by nourishments. Recently, a washover has developed and presents an ideal field case to study in detail how washovers develop.

Using PlanetScope and RapidEye imagery with a spatial resolution of 3 to 5 metres and weekly to monthly intervals, and by using existing LiDAR images, we investigated the seasonal and long-term evolution of a washover on Rottumeroog for the period 2009 to 2019. The satellite imagery was classified into three classes: vegetation, sand and water and it was studied how the different classes developed in time. Changes were related to storm and wind events.

It was found that the washover formed between October 2011 and May 2012. At first, the washover width was relatively small (Figure 1), which likely reduced the storm activity. When dunes were eroded in 2014 and the width of the washover opening increased, the washover rapidly expanded to the south and west, until it reached higher areas beyond which the washover could not expand. The expansion of the washover was coupled with a southward migration of the island (roll-over; Figure 2) as the beach was eroded and sediment from the beach was deposited in the washover. The washover showed strong seasonal patterns in vegetation growth as a result of storms mainly occurring between October to April and the growth cycle of the plants. After the storm season, vegetation starts to grow in the washover as conditions become more favourable. When floods occur in late autumn, vegetated areas change to sandy areas and conditions become unfavourable for vegetation growth. When the washover was still sheltered by the dune rows, conditions were more favourable for vegetation growth than when after these dunes were eroded in 2014. Vegetation regrowth was high again (~70% ±10% of the washover area) from 2016 onwards, which is likely because of an increase in elevation as a result of overwash and related reduced storm activity. Aeolian transport was common in spring but not in other seasons, as vegetation reduces the fetch in summer and the sand is too wet in winter because of the frequent overwash. Our results nicely demonstrate the seasonal and yearly patterns in washover development and can be used to validate models that have been developed. 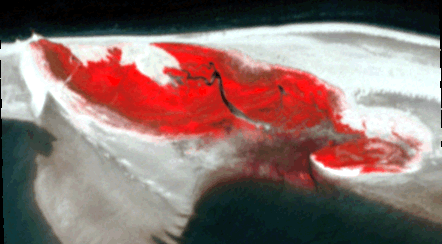 Figure 1 A false colour (NIR-Red-Green) satellite image of Rottumeroog in May 2012. 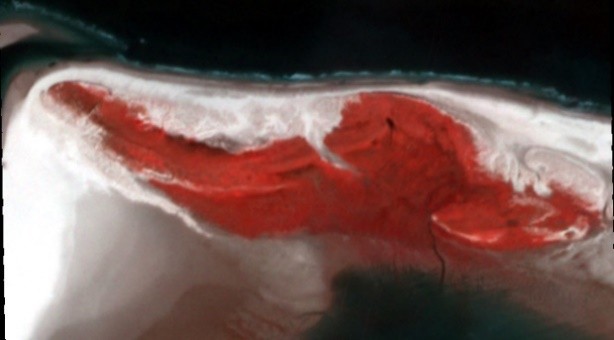