Modelling of annual sand transports at the Dutch lower shoreface

1 Deltares, This email address is being protected from spambots. You need JavaScript enabled to view it.

Up to now, it has been assumed that net transports across the coastal foundation's offshore boundary at the 20 m depth contour are negligibly small. In the framework of the Coastal Genesis 2.0 program we investigate sand transports across this boundary and across other depth contours at the lower shoreface. The purpose of this paper is to provide knowledge for a well-founded choice of the seaward boundary of the coastal foundation. The lower shoreface is the zone where the mixed action of shoreface currents (tide-, wind- and density gradient driven) and shoaling and refracting waves is predominant. Transport rates are relatively small and hence the bed levels in the lower shoreface undergo relatively slow changes.

We developed an efficient approach to compute the annual sand transport rates at the Dutch lower shoreface. It is based on the 3D Dutch Continental Shelf Model with Flexible Mesh (3D DCSM-FM), a wave transformation tool and a 1DV sand transport module. Waves and currents were decoupled to save computational time, ignoring wave-current-interaction. The effect of Stokes drift and return flow were included.

The wave transformation tool was found to be an appropriate tool to derive wave parameters at the lower shoreface, indicated by a good and equal performance of the tool over the depth range studied. Comparisons against measurements at Ameland, Terschelling and Noordwijk showed that the approach is suitable to correctly model hydrodynamics during normal wind and wave conditions, yielding transport values that are comparable to calculations based on measurements. Wind- or wave-driven residual flows under high energetic conditions were underestimated. 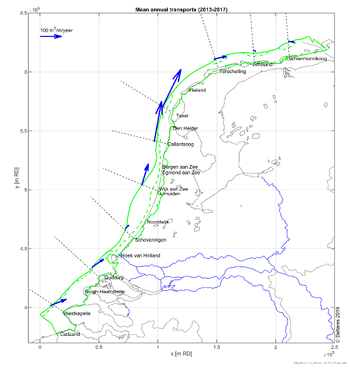