Infragravity (IG) waves are surface waves with relatively long periods (20-200 s). Despite their relatively low height in deep water, they can increase substantially in height in coastal waters and contribute to the nearshore hydrodynamics, sediment transport and dune erosion. Recent analysis of measurements in the North Sea showed substantial bursts of IG energy during storm events (Reniers et al., 2021). Only part of this energy could be attributed to local forcing of bound IG waves by sea-swell waves. The objective of this study was to identify the source and origin of the remaining free IG (FIG) energy. We used the SWAN model to verify the hypothesis that this FIG energy originated at distant coasts, where it was radiated seawards after generation by the breaking of sea-swell in the surf zone.

We extended the SWAN model with a source of FIG energy along the shoreline bordering the North Sea (based on the approach of Ardhuin et al., 2014). This source is based on an empirical relationship between the IG wave height and two bulk sea-swell parameters (the significant wave height and the mean wave period), which showed a good correlation at several stations in oceanic waters (Ardhuin et al., 2014). After calibration, we used the model to hindcast four storm events that resulted in the largest FIG wave heights in the observational record (between 2010-2018).

We will show that SWAN was able to explain a significant part of the FIG height variability that was observed at three stations during the four storms (see below Figure for an example during storm Xaver). This suggests that a significant fraction of the FIG energy can be attributed to radiation from distant shorelines. We will present how the modelling allowed us to identify the major source of FIG waves, that these radiated FIG waves were able to cross the North Sea basin and reach adjacent shores, and explore the role of bottom friction. Along the shorelines, the shoreward directed FIG energy was found to be a combination of FIG radiated from remote beaches and locally radiated FIG waves that are trapped by refraction. At present, the contribution from these FIG waves is not included in coastal safety assessments with wave-resolving storm impact models (e.g., XBeach), and additional research is required to understand the impact of FIG waves on coastal safety. 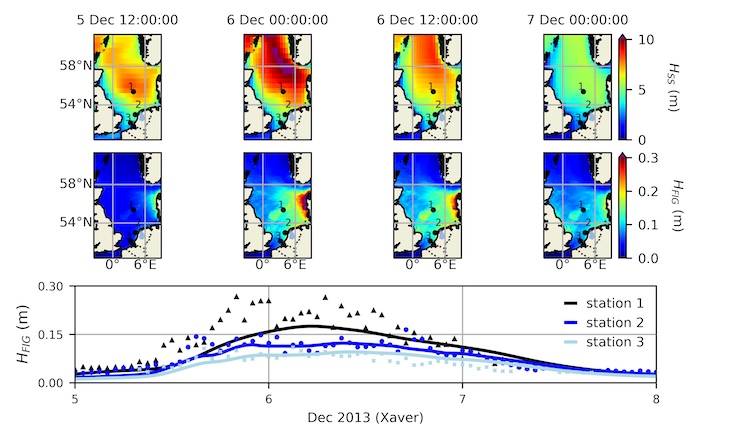